The Nairobi Ministerial Conference adopted a decision on cotton (WT/MIN(15)/46) prohibiting export subsidies and calling for a further reduction in domestic support. It also calls for improvements to market access for least-developed countries (LDCs). The decision aims to level the playing field for cotton exporters in the poorest countries, where the cotton sector is of vital importance.

THIS EXPLANATION is designed to help the public understand developments in the WTO. While every effort has been made to ensure the contents are accurate, it does not prejudice member governments’ positions.

The decision built on a proposal submitted in October 2015 by four cotton-producing African countries — Benin, Burkina Faso, Mali and Chad, known as the “Cotton Four”.

On export competition, the decision mandates developed countries to prohibit cotton export subsidies immediately while developing countries are required to do so no later than 1 January 2017.

On market access, the decision calls for cotton from LDCs to be given duty-free and quota-free access to the markets of developed countries — and to those of developing countries declaring that they are able to do so — from 1 January 2016. Cotton imports from LDCs currently account for less than 10 per cent of total cotton imports. The Nairobi decision aims to boost LDC exports of cotton and cotton by-products — including cotton oil and cotton seeds — and to increase the share of cotton imports from the poorest countries. 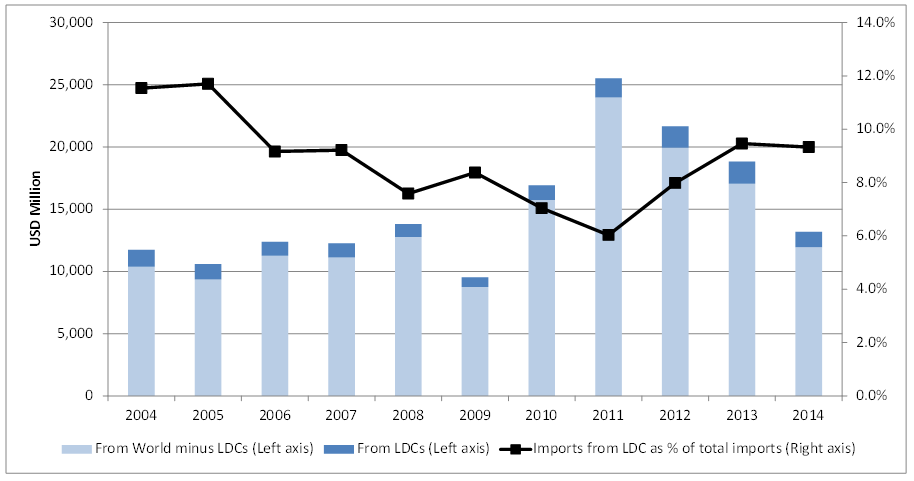 The domestic support part of the Nairobi decision acknowledges members' reforms in their domestic cotton policies — which may help to reduce trade distorting domestic subsidies for cotton production - and stresses that more efforts remain to be made.

The decision also envisages strengthening development assistance for cotton, including linking it with the broader Aid for Trade initiative. The proposal also seeks regular monitoring and other improved information on cotton.

The latest WTO Secretariat background paper (TN/AG/GEN/34/Rev.3) outlines members' trade policies in the cotton sector as notified to the WTO.

The Cotton Initiative was originally put forward by Benin, Burkina Faso, Chad and Mali (the Cotton Four) in 2003 at the General Council. The proposal described the damage caused to them by cotton subsidies in richer countries, called for the subsidies to be eliminated, and for compensation to be paid to cover economic losses caused by the subsidies. The Cotton Four subsequently introduced a “Sectoral Initiative in Favour of Cotton”, which was presented later that year to the Trade Negotiations Committee.

Trade ministers at the 2005 Hong Kong Ministerial Conference committed to address cotton “ambitiously, expeditiously and specifically” within the agriculture negotiations, including the commitment to make  reductions in trade distorting subsidies and improve market access for cotton exports from LDCs, to deal with this quickly and for these reforms to apply “specifically” to cotton.

In 2013, the Bali Ministerial Decision on cotton reaffirmed members' commitment to reform policies with distorting effects on the world cotton market and to increase members’ work towards reform.

Amber Box: Domestic support for agriculture that is considered to distort trade and therefore subject to reduction commitments. Technically calculated as “Aggregate Measurement of Support” (AMS).

Blue Box: Amber Box types of support, but with constraints on production or other conditions designed to reduce the distortion. Currently not limited.

de minimis: Minimal amounts of domestic support that are allowed even though they distort trade — up to 5 per cent of the value of production for developed countries, 10 per cent for developing.

Green Box: Domestic support for agriculture that is allowed without limits because it does not distort trade, or at most causes minimal distortion.