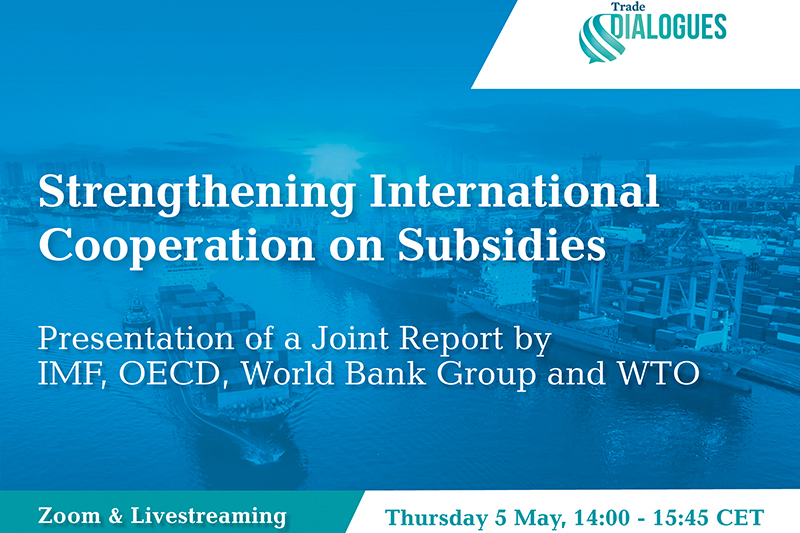 Strengthening International Cooperation on Subsidies
Presentation of a Joint Report by the IMF, OECD, WBG and WTO

Open trade, backed by the multilateral rules-based trading system, has been an effective catalyst for growth and poverty reduction for decades. But the growing use of trade- and investment distorting subsidies undermines the predictability and stability created by trade commitments, fuels trade tensions and erodes public support for open trade. The new report "Subsidies, Trade, and International Cooperation", prepared jointly by staff from the IMF, OECD, World Bank Group and WTO, takes stock of what we know and don't know about subsidies and their cross-border effects, and explores an agenda for dealing constructively with subsidies through improved transparency, better measurement, more focused dialogue and enhanced regulation of subsidies.

This event will present the results of the report and discuss its implications for international cooperation between the four authoring organizations and beyond.

Presentation of the report

Brad McDonald is Deputy Chief for Trade Policy in the IMF External Policies Division, where he is responsible for IMF-wide policy and guidance on global trade policy issues and advises IMF country teams. Among other projects, he was the IMF lead on joint IMF-WB-WTO policy papers in 2017 (Making Trade an Engine of Growth for All) and 2018 (Reinvigorating Trade and Inclusive Growth), and the recent joint IMF-OECD-WB-WTO paper (Subsidies, Trade, and International Cooperation).  Since joining the IMF in 1997, he has also served on various IMF country teams in Europe, central Asia, and Africa; reviewed IMF lending programs for low-income countries; and served as IMF Representative to the WTO and Head of the IMF’s Geneva Office.

As a member of the U.S. Government Senior Executive Service from 2013-16, Brad led the U.S. Treasury’s Office of Trade Policy and Financial Services Negotiations and represented Treasury on the inter-agency U.S. Trade Policy Staff Committee. He received Treasury’s Meritorious Service Award for contributions to the negotiations for the Trans-Pacific Partnership (TPP) and to the 2015 renewal of Trade Promotion Authority.

Before joining the IMF, Brad was a Trade Policy Analyst in the GATT and WTO Secretariat (1993-96), where he prepared Trade Policy Reviews and contributed to the Secretariat’s numerical analysis of the effects of the Uruguay Round. He was previously an agricultural economist in the Economic Research Service of the U.S. Department of Agriculture. He holds a Ph.D. in Economics and Agricultural Economics from the University of Wisconsin-Madison.

José Signoret is a Senior Economist in the Global Trade and Regional Integration unit in the Macro, Trade, and Investment Global Practice of the World Bank. His recent research topics include: non-tariff measures, analysis of preferential trade agreements, and firm-level trade analysis. Before joining the World Bank, he worked in the Research Division at the U.S. International Trade Commission, where he led several research projects, including the recent report on the TPP agreement. He also served as Director for Trade Capacity Building at the Office of the U.S. Trade Representative during 2007–2008, focusing on TCB efforts in Latin America. He holds a Ph.D. from Berkeley and a master’s degree from Michigan.

Alexander Keck is Chief, Global Economic Analysis, at the World Trade Organization (WTO) and the WTO's Deputy envoy ("Sous-Sherpa") to the G20, preparing the annual Leaders' Summit. In 2012, he was appointed Titular Professor of International Economics at the University of Geneva. He has published extensively on trade and macroeconomic issues in refereed journals, books and reports and supervised over two dozen PhD and Masters' theses at leading US, EU and Swiss universities, where he has also been a guest lecturer. He is regularly solicited for interviews by media outlets, such as the Financial Times, Wall Street Journal, International Herald Tribune, The Economist, Washington Post, Reuters, BBC, Der Spiegel, Handelsblatt and Deutsche Welle.

As Deputy Director of the Trade and Agriculture Directorate (TAD), Ms Nielson helps oversee work to develop and communicate evidence-based advice to governments with the aim of helping them improve the domestic and international performance of their policies on trade, food, agriculture and fisheries. Ms. Nielson has over 25 years' experience in multilateral trade and development, strategy and management. She was previously Head of the Emerging Policy Issues Division in TAD, prior to which she worked for the World Bank Group (WBG), including in the office of the then-President, Bob Zoellick. Ms. Nielson began her international career in the Australian Department of Foreign Affairs and Trade, following which she joined the OECD Trade Directorate, working on trade in services. Ms Nielson holds a Bachelor of Arts Hons (1st class) and a Masters in Foreign Affairs and Trade from the Australian National University.

Trudi Hartzenberg is the Executive Director of the Trade Law Centre (tralac). Her research is in the areas of international trade, competition policy, industrial development and Africa’s integration agenda. She has a special interest in, and commitment to capacity building. She has designed and delivered academic and tailored short courses on a broad range of trade-related topics for policy makers in Africa. She currently serves on the WTO Chairs Advisory Committee and is a member of the Committee for Development Policy of the United Nations Economic and Social Council (ECOSOC).

André Sapir is Professor at the Université Libre de Bruxelles and Senior Fellow of Bruegel, the European think tank. Previously, he taught at the University of Wisconsin-Madison, the Graduate Institute in Geneva, the College of Europe in Bruges, and was visiting fellow at the IMF, the World Bank and the WTO. Between 1990 and 2004, he was affiliated with the European Commission, working first as Economic Advisor to the Director-General for Economic and Financial Affairs, and then as Principal Economic Advisor to President Romano Prodi. André Sapir has written extensively on trade policy, globalisation and European economic integration. His most recent book, co-authored with Petros Mavroidis, China and the WTO: Why Multilateralism Still Matters, was published by Princeton University Press in 2021. He holds a PhD in Economics from The Johns Hopkins University, where he worked under the supervision of Bela Balassa. He is a member of the Royal Academy of Belgium.

TU Xinquan is Dean and Professor of the China Institute for WTO Studies of University of International Business and Economics located in Beijing, China

Professor TU Xinquan got his Ph.D. in international trade from this university in 2004. During 2006-2007, he was a visiting scholar at the School of Advanced International Studies of Johns Hopkins University. In the summer of 2009, he was invited as a visiting fellow by the Korea Institute for International Economic Policy (KIEP). He conducted his research on the GPA under the WTO Secretariat for three months in 2011. He was also a visiting scholar at SWP(German Institute of International and Security Affairs), Middlebury Institute of International Studies at Monterrey, and Indiana University on a variety of trade topics. His research and teaching focus on Chinese trade policy, WTO, Government procurement, US trade policy, and US-China trade relations. He authored China’s position, role and strategy in the WTO (published by The Press of UIBE, 2005) and published a number of papers and chapters in books. He has been granted a number of research projects by the China Social Science Foundation, the Ministries of Commerce, Education, Finance etc. He was also interviewed by CCTV, Phoenix TV, Bloomberg, Reuters, Xinhua News Agency, and other major media on hot issues about China’s trade and economic situation and China’s international economic relations. 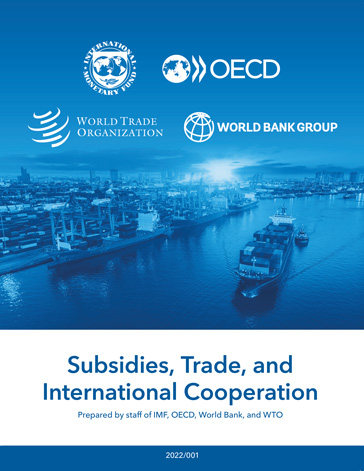