> explanation in “Understanding the WTO”

The decision was welcomed by members as an achievement both for Costa Rica in bringing its support back within its WTO commitment, and for the Agriculture Committee’s role in resolving possible contentious issues. The committee, which consists of all 159 WTO members, has been discussing this breach of Costa Rica’s commitment since 2009 in response to a notification and then since September 2010 more generally without any member seeking to turn it into a fully-fledged legal dispute.

Members praised Costa Rica for sharing information with them all along and being prepared to answer questions about the situation. The issue was first raised in the committee after Costa Rica notified its trade-distorting domestic support (sometimes known as “Amber Box” or “AMS” support) figures, which reached up to six times the levels the country had agreed in the WTO. Costa Rica continue to provide information at almost every meeting.

The committee also discussed a number of other countries’ programmes, including continuing concerns about whether Thailand’s potentially-subsidized loan scheme for rice (known as “paddy pledging”) is also causing it to breach its commitment ceilings — Thailand said it is still compiling data on this — and Canada’s dairy policy, which New Zealand has queried in 10 meetings and Canada has repeatedly argued does not involve subsidies and has no impact on imports or trade. (More below.)

Meanwhile, the committee has also been looking at how to improve the way it functions. Chairperson Guilherme Bayer reported on informal consultations earlier in the day on updating a list of “significant exporters” used to monitor export volumes and detect whether the exports might be subsidized, on alternative and less formal ways of sharing information, and on a proposal from Argentina for the Secretariat to compile a guide to documentation on notification practices.

Members want to speed up discussion on “significant exporters” and the chair said he would respond by organizing consultations aimed at seeking a solution quickly and practically. The list is out of date, but members differ over how to alter the listed products and exporters.

The Secretariat also announced that a new database on agriculture is up and running (http://agims.wto.org/). It contains information on the questions and answers in the committee meetings, and on information that members have supplied in notifications on domestic support, export subsidies and market access in agriculture.

The chairperson reported that members submitted 31 new notifications since the last meeting in March, but 11 delegations still have not replied to questions asked in the committee since 2011.

He said that the number of overdue notification on measures that members implemented in 1995–2011 is improving slightly, but 41% of domestic support notifications still have not been supplied for the years up to 2011, with only a slightly smaller shortfall (38%) on export subsidies. 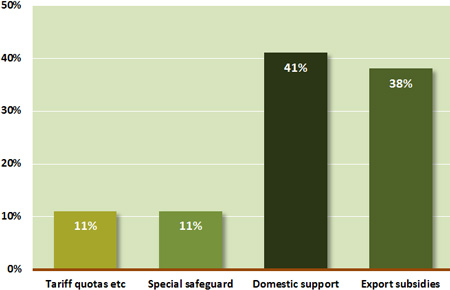 One of the “regular” Agriculture Committee’s key responsibilities is to see how countries are complying with their commitments on subsidies and market access and to discuss issues that arise. It monitors whether members are keeping the promises they made as a result of the 1986–94 Uruguay Round negotiations or their membership deals if they joined the WTO later. Members can and do also ask about agricultural measures that have not yet been notified or have not been notified at all.

As usual, the most detailed questions and answers were about domestic support as members sought to understand each other’s programmes and their categorization under the Amber Box (domestic support that distorts trade and is therefore limited with reduction commitments) or the Green Box (which normally does not distort trade and has no limits).

The questions and answers can be found here when they have been processed and derestricted after a few weeks.

Costa Rica said that the government decided to eliminate price support for rice after studying its options following a ruling by its Administrative Court in July 2012.

To comply with its WTO commitment, Costa Rica will still be able to provide trade-distorting support for agriculture (for example price or income support linked to production) by up to $15.9 million.

The notification (document G/AG/GEN/110 of 31 May 2013) says: “The Government of Costa Rica hereby advises that the price support mechanism for rice will be eliminated as of 1 March 2014 pursuant to Executive Decree No. 37699-MEIC, published in Official Journal La Gaceta on 20 May 2013. Attached to this communication is Executive Decree No. 37699-MEIC (in Spanish only).”

Canada, the US, Australia, New Zealand, the EU, Norway, Pakistan and the Philippines praised the announcement.  Several acknowledged the difficulty Costa Rica had faced in dealing with domestic pressures while trying to comply with its WTO commitments. “Compliance is more visible when it’s difficult”, Norway said.

Meanwhile, the possibility that Thailand might exceed its committed ceilings for rice subsidies continued to be a concern for some members. The US, Canada and EU sympathised with what Thailand described as the hard work being undertaken in Bangkok to coordinate the several agencies compiling the necessary information, and they said they looked forward to receiving the notifications soon, as Thailand had promised.

The Philippines noted that Thailand has lost its place as the world’s top rice exporter and is accumulating stocks under the loan programme which “cannot be held forever”. The Philippines and Pakistan said they hoped to hear how the stocks would be released because of the possible impact on world markets. Japan said it is also interested in the issue.

Thailand has agreed to limit its trade-distorting domestic support in agriculture to 19,028.48 million baht per year and has a general WTO commitment not to subsidize exports.