> explanation in “Understanding the WTO”

The committee, which comprises all 159 WTO members, pressed both countries for more information (some details below), and some delegations also urged the membership as a whole to keep up to date with the information they share on their agriculture programmes through official notifications to the WTO.

Sharing information is an important part of the committee’s work, principally through notifications to the WTO. Members heard that almost half (43%) of domestic support notifications still have not been supplied for the years up to 2011, with only a slightly smaller shortfall (39%) on export subsidies. It was briefed on a new database, which will soon provide access to the questions and answers in the committee since 1995, with the longer term aim of also including the notifications. 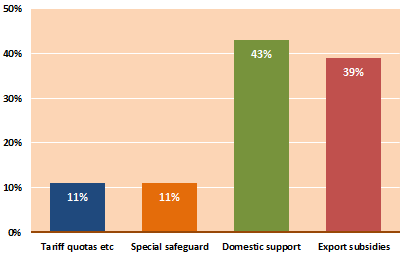 A number of members have proposed that the committee improves the way it operates, including how members notify information and discussions continued in this meeting. This is partly in response to the statement from WTO Ministers when they met in Geneva in 2011, underscoring the importance of the WTO’s regular work and calling for it to be strengthened:

“Ministers underline the importance of the work of regular WTO bodies including their role in the oversight of implementing existing Agreements; dispute avoidance; transparency through monitoring and reporting and as a forum for the consideration of trade-related issues raised by Members. Ministers call for strengthening and improving their functioning.”

Several members said they would like to revive discussions on updating the list of “significant exporters”, an issue that contributes to transparency, requiring the listed countries to provide information on relevant export volumes so that the committee is better able to monitor any potential use of export subsidies. The 1995 list is out of date: for example it does not include countries that recently joined the WTO and are major, significant exporters of wheat, rice, coarse grains or cheese. However, there are also proposals to alter the listed products and members differ over this.

The full agenda of this meeting is here.

One of the “regular” Agriculture Committee’s key responsibilities is to see how countries are complying with their commitments on subsidies and market access and to discuss issues that arise.

Since the last meeting, 66 new notifications were received, delegates were told. Members can and do also ask about agricultural measures that have not been notified. Eight sets of questions were asked about these.

As usual, the most detailed questions and answers were about domestic support as members sought to understand each other’s programmes and their categorization under the Amber Box (domestic support that distorts trade and is therefore limited with reduction commitments) or the Green Box (which normally does not distort trade and has no limits).

The questions and answers can be found here when they have been processed and derestricted after a few weeks.

Costa Rica has officially notified its breaches, and members wanted more information on how the government is proceeding with its efforts to bring the support into line with the commitments — including overcoming a legal obstacle.

It said it is continuing its legal process aimed at bringing its domestic support for rice within its committed limit. The US, Canada, Australia, EU and Pakistan continued to express concerns. Australia appreciated Costa Rica’s transparency but asked whether there was anything else that the committee could do to speed up the process (see this news story and earlier meetings).

Thailand’s programme, on the other hand, has not been notified yet. For the latest set of questions, Thailand said it was still waiting for replies from capitals. It said its Commerce Ministry has not yet been able to reply to the questions asked because of the need to coordinate several agencies.
The programme is known as “paddy pledging” because it involves loans, with paddy (unmilled rice) as collateral valued according to government-set prices. Questions and comments from Canada, the US, Australia and the EU focused on the need for information and the possibility that Thailand might be breaching its domestic support limits or might have to offload the stocks by subsidizing exports, even though it has a general WTO commitment not to do so.

Chairperson: Ms Emalene Marcus-Burnett (Barbados) handing over to Mr Guilherme Marquardt Bayer (Brazil) at the end of the meeting