“We must seize our opportunity. Our success here in Bali will provide the necessary impetus for an expansion of global trade, that in the end, will help reduce poverty around the world,” said Indonesian president Susilo Bambang Yudhoyono.

“I truly believe we can take a great step forward here in Bali. Success breeds success. We have an opportunity to give Geneva a sense of optimism and signal a new can-do attitude in the negotiations. It is up to each and every one of us to display a spirit of unity and collective resolve to set a new course for our Organization — the WTO,” said Indonesia’s Trade Minister Gita Wirjawan , who chairs the conference.

The formal statements echoed calls from a wide range of members for agreement in Bali, which they described as a “pivotal moment for the future of the negotiating arm of the multilateral trading system.”

“We should reject the notion of ‘North against South’—a term that exaggerates our differences rather than our complementarities. We should view one another as partners,” said President Susilo Bambang Yudhoyon.

More than what’s on the table: law of the jungle?

The focus of the ministerial conference — the WTO’s top decision-making body, which meets approximately every two years — is on a package of issues that have been negotiated particularly intensively over the past few months. They are grouped under three headings:

Director-General Azevêdo said “a few, very limited, specific and localised issues” remain unresolved from talks among ambassadors and officials in Geneva. These obstacles “require political calls to overcome — political calls of a nature that we simply cannot make in Geneva”, he told the ministers.

If WTO members fail to agree within the next few days — and “it’s now or never,” he said — the loss would be more than the issues on the table themselves.

“What’s at stake is the cause of multilateralism itself. The multilateral trading system was never the only option for trade negotiations. It always co-existed with, and benefitted from, other initiatives — whether regional or bilateral,” he said, referring to the numerous trade agreements also being negotiated around the world.

“But if these non-multilateral undertakings become the sole negotiating channel, then we have a problem. In such fora the agenda is inevitably limited — issues of importance to developing countries, like agricultural subsidies, are not included.

“And developing countries also lose out [because they are often left out]. The smallest would be marginalised from virtually all trade negotiations. This would be a tragic outcome.”

Speaking at a press conference afterwards, Mr Azevêdo stressed that without the multilateral trading system the world would look like a jungle, and the poor would suffer the most.

He added that although the package will not be perfect for everyone, “no member is being asked to do the impossible.”

This is how Mr Azevêdo reported on the package brought from Geneva, containing 10 draft texts, under the three headings:

“By minimizing unnecessary border delays in this way, it is estimated that we could provide a boost to the global economy worth up to $1 trillion per year — thereby delivering much needed growth and jobs. The text that we brought from Geneva will also ensure the provision of technical assistance to support developing economies and the least developed economies to implement these reforms, and support their better integration into global trade flows.

“Customs modernisation and upgrading alone may not be sufficient to integrate developing countries and [least developed countries] into global patterns of supply. But it is clearly an indispensable and necessary step.

“And, indeed, developing countries would stand to gain the most. It is estimated that we could see an expansion in their exports of up to 10% — compared to a 4.5% expansion in developed countries. It is significant that there is not, in this pillar or in the package as a whole, a developed versus developing divide.”

“Agriculture is a cornerstone of the Doha Development Agenda — these issues are very dear to developing countries.

“And in this area our package also delivers important outcomes. The texts we brought from Geneva would set us on track for a reform of export subsidies and measures of similar effect, and it would provide for better implementation of tariff rate quota commitments. Both of these measures would potentially have very positive effects in boosting agricultural trade, and in setting the stage for future negotiations.

“The agriculture pillar would also provide temporary protection for food security programs under which countries stockpile grain for distribution to the poor.

“In certain developing countries these programs run the risk of legal action where they exceed agreed subsidy limits.

“So the text we brought from Geneva would not only provide this temporary shelter from legal action but, more importantly, it would put in place a work program to find a permanent solution to this issue.”

“Here, a monitoring mechanism [meetings and other means to monitor how special treatment for developing countries is being implemented] would provide for the review and strengthening of special and differential treatment provisions, which are contained in all WTO multilateral texts. This is a vital achievement for developing and least-developed countries.

“There are also a series of specific measures here to support the least developed countries.

“And, finally, we would see a commitment from WTO members to enhance the productive capacity of developing country cotton producers, especially [least developed countries] — and to improve transparency on the barriers that they encounter in major consumer markets.” 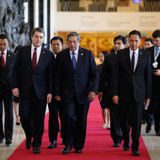 > Videos about the Ninth Ministerial Conference