For the Bali Ministerial Conference, WTO members have been working on four proposals out of a much larger package that has been on the table in the Doha Round agriculture negotiations since 2008.

THIS EXPLANATION is designed to help the public understand developments in the WTO. While every effort has been made to ensure the contents are accurate, it does not prejudice member governments’ positions.

The four are on:

(Also being discussed is a proposal on cotton — see separate briefing note.)

From draft modalities to Bali package
What WTO agriculture negotiators have been working on since 2008, and the chairs presiding over the talks at that time. Click to see the larger image 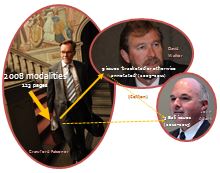 The four issues (plus cotton) were picked after WTO members called for a change of approach at the last Ministerial Conference in 2011. The ministers wanted to try to get the Doha Round moving again, following several years of impasse. They agreed that members should select issues that might be agreed earlier than other issues, on the understanding that the rest of the Doha Round package would be agreed later:

“Ministers commit to advance negotiations, where progress can be achieved, including focusing on the elements of the Doha Declaration [which launched the Doha Round in 2001] that allow Members to reach provisional or definitive agreements based on consensus earlier than the full conclusion of the single undertaking,” they said in 2011.

The four are fundamentally different from the subjects negotiated immediately before the 2011 conference. The starting point for both sets of subjects was the main draft text in the agriculture negotiations (the “draft modalities”) compiled in 2008 by New Zealand Ambassador Crawford Falconer who chaired the talks at that time. This 123-page document was the result of eight years of negotiations, including a particularly intensive period in 2007 and 2008.

A number of major stumbling blocks remained and were marked with square brackets or notes. Resolving them would represent major progress. The nine main issues were discussed in 2009–2011 but with no conclusion. By contrast, the four subjects tackled after the 2011 conference were picked because the proposing countries considered them to be potentially among the easier subjects to deal with, giving the talks the best chance of making some progress.

After a period when negotiators explored the technical implications of the proposals, particularly the one on stockholding for food security, members resumed negotiating the substance of the proposals in March 2013. The presence of ambassadors took the talks to a new level as the negotiators focused more seriously on what might be achieved in Bali, what might not, and what could be left until after the conference.

In early November, the chairperson of the agriculture negotiations circulated the first set of draft texts for a meeting of ambassadors chaired by Director-General Roberto Azevêdo. The aim was to produce final versions for ministers in Bali. Intensive consultations followed, and some difficult compromises were struck in order to produce the texts that would be forwarded to ministers in Bali. Even then, some members had reservations either on some parts of the texts themselves, or on how they would fit into the overall package of issues for Bali.

Export subsidies (in the broadest sense)   back to list

Unlike the other subjects, export subsidies are a major part of the broader package in the agriculture negotiations. It is also proving a difficult subject for the Bali meeting, with some developing countries complaining that the demands on them to make commitments in trade facilitation are not matched by developed countries’ willingness to make commitments on export subsidies. Some other countries say the two should not be linked.

The draft text for ministers to agree in Bali stops short of making legal commitments. But it contains some of the strongest statements of intent that have ever been made on the subject.

If it is agreed, members would “exercise utmost restraint” in using any form of export subsidy. They would “ensure to the maximum extent possible” that progress will be made in eliminating all forms of export subsidies, that actual subsidies will be well below the permitted levels, and that disciplines will apply to export policies that may have the same effect as subsidies.

These policies are grouped together as “export competition”. They include subsidies and other advantages gained from government-supported export credit and insurance, food aid and exporting state trading enterprises.

The draft also proposes improved information sharing and monitoring, in order to support the reform in this area.

The draft was produced after intensive consultations in November and was a compromise between those seeking legal commitments to reduce subsidies and those who argued that this could not be done in Bali without matching steps on agricultural market access, domestic support and the rest of the broader Doha Round package.

WTO members had already agreed to eliminate all of these, when the 2005 Hong Kong Ministerial Conference set 2013 as the deadline. That deadline has been missed because of the impasse in the Doha Round.

The G–20 group of developing countries had originally proposed in May that developed countries halve their ceilings on the money they spend on export subsidies by the end of 2013 and phase in a 540-day limit in the repayment period for export credit (the final target is 180 days). It also envisaged setting a new limit on the quantities of subsidized exports, at the average actually exported with subsidies for 2003–2005.

A number of countries opposed any legally binding decision in Bail, including lower limits on export subsidies. They said they could only do this as part of an overall agricultural package within the Doha Round. Some said the proposed freezing of subsidies at current levels would penalize those that had undertaken reforms because they would end up with proportionally lower limits than those that had reformed less.

Tariff quotas: underfill and special treatment     back to list

Tariff quotas (also known as tariff-rate quotas, TRQs) are where import duties are lower on quantities within the quotas and higher for quantities outside. They were agreed in the 1986–94 Uruguay Round negotiations as a means of allowing exporters some access to other countries’ markets when the normal (out-of-quota) tariffs on imports are high.

Some countries are concerned that the methods governments use to share these quotas among traders (“TRQ administration”) can become an additional trade barrier. Evidence of this, they say, is when parts or all of the quotas are not used (they are “under-filled”). On the other hand, importing countries often say the underfill is caused by supply and demand in the market (for example, bad harvests in supplying countries or when cheaper local produce is available).

The G–20, group of developing countries, has proposed a number of measures for sharing information and monitoring how much of the quotas are used. (The text was not new: it was taken from paragraphs 115–125 and Annex E of the 2008 draft “modalities” for the agriculture negotiations as a whole, and the version circulated in October 2012 was essentially identical.)

Under the proposal, if a quota is persistently under-filled — and information-sharing and consultations prove fruitless — the importing government would have to apply one of a prescribed set of methods for administering quotas aimed at removing impediments. Either they would accept quantities within the quotas, first come first served, at the importing ports until the quota limit is reached, or they would issue import licences for every request (“automatic licence on demand”) up to the quota limit.

Members differed over whether developing countries should be exempt from having to change the method of administering quotas. The compromise that was struck in November was intricate. The text now says that the paragraph dealing with the change of administration method and with the exemption for developing countries would lapse after six years unless members agree to extend or modify it; however, the “provisions” of that paragraph would continue to be applied by all members except by countries for countries on an opt-out list — the opt-out countries could choose not to apply the provisions. Only one (the US) has said it will be on the list. Other developed countries have declared they will not opt out.

Stockholding for food security: interim ‘due restraint’    back to list

When governments buy food from farmers at supported prices to build up stocks, that counts as “Amber Box” domestic support — the type that is considered to distort trade by affecting market prices and the quantities produced.

Amber Box support is limited. Most developing countries are allowed an amount that is conceptually minimal (“de minimis”) — up to 10 per cent of the value of production. However, a number of developing countries say that the way the support is calculated means they are finding it more and more difficult to stay within the limit. And they say this is important for them when their stockpiling under the Amber Box is in programmes that also include supplying the stocked produce to low-income consumers.

One group, the G–33, circulated a proposal in November 2012 to amend the Agriculture Agreement so that support in this form in developing countries — to benefit low-income farmers or those who lack resources — would be considered “Green Box” and therefore be allowed without limits. This proposal was already in the 2008 draft document covering all the issues in the agriculture negotiations (see Annex B of the 2008 draft, in the section on “public stockholding for food security purposes”).

Although members agree that food security is a vital issue, particularly for the poor, some are concerned that this particular way of dealing with it might weaken the disciplines that apply to all domestic support.

As the Bali conference approached, it became clear that amending the Agriculture Agreement on this point was too controversial to be agreed in time for the conference. Instead, chairperson John Adank, New Zealand’s ambassador, began working with members on an interim solution.

Consultations in November produced a compromise text. Members would temporarily refrain from lodging a legal complaint (“due restraint”, sometimes also called a “peace clause”) if a developing country exceeded its Amber Box limits as a result of stockholding for food security. Work on finding a longer term solution would continue after the ministerial conference. Countries using these policies would provide up-to-date data and other information on what was involved, so that other countries could see what was happening.

But they disagreed on a number of issues, and the most difficult compromises were designed to make these as acceptable as possible. They included: “safeguards” to ensure that the public stockholding programmes would not be misused, and the released food would not affect trade, the number of eligible products (“traditional staple food crops”), how long the restraint on disputes would last, and the work to be undertaken after Bali. Concerns about the impact on other countries were also aired in the separate, regular Agriculture Committee’s meeting in October.

The G–33 is also proposing to expand the list of “general services” under the “Green Box”, a call from the African Group dating back to 2006. This proved less controversial. Developing countries want more programmes that are relevant to them on the list, and the African Group and G–33 have identified: land rehabilitation, soil conservation and resource management, drought management and flood control, rural employment programmes, issuing land ownership titles and settlement programmes.

The additions deal with Annex 2 of the Agriculture Agreement, which defines the Green Box. Most of the annex lists Green Box programmes, including “general services” (Paragraph 2), although a programme that is not listed can also be eligible for the Green Box so long as it meets the criteria of the Green Box. These are set out in Paragraph 1, which says Green Box measures “shall meet the fundamental requirement that they have no, or at most minimal, trade-distorting effects or effects on production.”