The proposal has been discussed in the Sanitary and Phytosanitary Measures (SPS) Committee for some time, and was one item on the agenda of a meeting whose more routine work also focuses on specific trade concerns — among those raised this time were measures to deal with African swine fever, fruit flies and other pests, radiation contamination following the nuclear power station accident in Japan, genetically modified pollen in honey and mad cow disease.

Members also continued to work on a definition for private SPS standards. They now have information on definitions used by other international organizations and elsewhere and have to decide how to draw on that information. Consultations will continue.

The committee, which consists of all 160 WTO member governments, monitors how countries are applying the WTO SPS Agreement, which deals with food safety and animal and plant health, and discusses issues arising from these rules and from individual countries’ measures.

Its importance in trade is underscored by the numbers of developing country officials applying to participate in various training activities. The Secretariat reported that 592 officials applied for 50 funded places in a workshop on risk assessment and 85 for 25 places on an advanced SPS course in Spanish.

Chair’s mediation role back to top

The mediation decision, sometimes called “ad hoc consultations”, will be the committee’s latest contribution to helping trade flow more smoothly as it deals with one of the pre-occupations of importers and exporters facing non-tariff barriers — the standards countries set on a range of issues, from maximum pesticide residues in food to preventing the spread of pests such as fruit fly and diseases such as bird flu in agricultural products.

It will add a new tool for resolving differences on specific trade concerns, while avoiding expensive and complicated legal challenge under the WTO’s dispute settlement procedure.

Concerns of this nature are usually first raised in the committee, when members seek a resolution through consultations, discussion in the committee, and peer pressure. Here, the two sides are left to resolve their differences on their own.

The new system bridges a gap between raising concerns in the committee and full-scale litigation. It is voluntary and is not legally binding but it does provide an opportunity for the two sides to hear the opinion of a third party: a mediator, usually the SPS Committee’s chairperson. This could be confidential or reported publicly.

The SPS Agreement already allows members to seek the chair’s services as a mediator (Art.12.2). The new decision spells out steps that the members concerned and the chair should follow, provided those members agree to use the system.

The final hurdle appeared to be cleared when India said in consultations before the meeting that it was satisfied with the answers to a number of its queries and asked for a few amendments to the draft. Some other countries said they would need to consult their capitals on the changes but agreed that the committee could adopt the decision if there were no further objections raised by 5 September (officially known as adopting the decision “ad referendum”).

(The end of the consultations also marked the end of Maria Albarece’s term as chairperson. She handed over to Lillian Bwalya of Zambia at the start of the formal meeting, although Ms Albarece, from the Philippines delegation, reported on this and other consultations during the meeting.)

Information and specific trade concerns back to top

They also shared information with each other about their regulations or SPS administrations (Russia, Australia and Canada), radiation from the Fukushima nuclear power station (Japan), the latest situation with African swine fever found in wild and farmed pigs (the EU and Russia), and about their disease-free or pest-free status (South Africa, Argentina and Rep. Korea).

All of this comes under the SPS Committee’s main task of monitoring how countries are implementing food safety and animal and plant health measures under the WTO Agreement, and of discussing issues arising from that, including the work of recognized international standards-setting bodies. Its deliberations range from comments on specific measures to broader principles.

A major contribution to this task is the information members share with each other through notifications to the WTO. Among the specific concerns (old issues identified by their number in the spsims.wto.org database) were:

Japan stressed that it “will have to resort to other actions under WTO agreements”, if Rep. Korea continues to fail to respond to requests for consultations and for import bans on fish and other products to be lifted. Japan described these as non-transparent, without scientific basis, discriminatory and restricting trade more than necessary. Rep. Korea replied that Japan has supplied a vast amount of information, which had to be translated from Japanese into Korean, and is still being analysed

Japan also said Chinese restrictions applied to 10 prefectures out of the country’s total of 47, and in some cases to other areas, are also excessive. China said it continues to examine technical data and will review the measures according to the results of its analysis and research.

Other issues (full list below). The EU and Russia continued to differ over African swine fever. They criticized each other’s SPS regimes for being too lax and contributing to the disease’s spread. The EU contrasted the low numbers of incidences in its own member states with the large numbers in Russia; and Russia accused some parts of the EU has having uncontrolled transportation.

The EU said a labelling requirement for honey, which had aroused complaints previously, is about to be eased. New legislation on honey reclassifies pollen (including from genetically modified plants) as a natural constituent rather than an ingredient of honey. This means that producers will no longer need to include the genetically modified pollen in their lists of ingredients on labels. Argentina said it hopes the new regulations, which will be applied by June 2015, will allow its honey exports to recover.

Chile was the latest country to complain about the closure of Jakarta port in Indonesia (concern no. 330), and the EU raised the perennial issue of mad cow disease (bovine spongiform encephalopathy or BSE) complaining about restrictions in particular by China, which it said are unjustified, do not meet the standards of the World Organization for Animal Health and are not supported by science.

And at the end … back to top 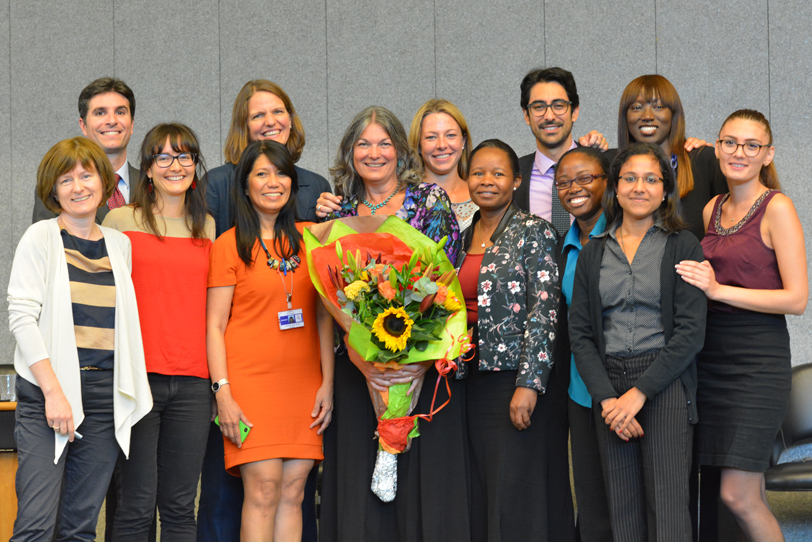 Delegates paid tribute to Gretchen Stanton, who announced she is stepping down after almost 20 years as the committee’s secretary, although she will remain the head of the SPS unit in the Secretariat’s Agriculture Division. Ms Stanton has worked with 15 chairs in the committee’s 60 meetings. Her replacement will be Christiane Wolff.

Next meetings back to top

(including informal meetings) These dates could still be changed:

CHAIRPERSON: Ms Lillian Bwalya of Zambia, taking over from Ms Maria Albarece of the Philippines at the start of the meeting

These are some of the trade issues or concerns discussed or information supplied by members.

(Numbers are “specific trade concerns” numbers in the database http://spsims.wto.org. Documents can be found in https://docs.wto.org)