Since its first meeting, members have used the WTO Technical Barriers to Trade (TBT) Committee as a forum to discuss issues related to specific measures (such as technical regulations, standards and other requirements) maintained by other members. These “specific trade concerns” (or, simply, “STCs”) take up most of the Committee's agenda. Essentially, members raise STCs to find out more about the scope and implementation of each other's regulations in light of the core TBT obligations (for example, regulating health without unnecessarily disrupting trade). The discussion is mostly about measures in the pipeline, but can also be about the implementation of existing measures.

This multilateral review of measures is an example of how the WTO's regular work can have a positive, and sometimes relatively quick, impact on everyday life. Members often express their concerns based on the impact that a proposed regulation by another member may have on their consumers and companies. And it is not uncommon for such concerns to be heard and taken into consideration. STCs are, in a sense, a bridge between the WTO and the “real world”.

Many such “real world” discussions were highlighted during last week's TBT Committee meeting. For example, nutrition labelling, present in the everyday life of consumers, was in focus - in particular, various proposals relating to health claims such as “traffic-light” nutrition labelling, consisting of adding a label with a red or green “traffic light” according to the healthiness of the content of food products. Tobacco was also high on the agenda, with a record number of four measures on so-called plain packaging being discussed. Discussions also addressed a wider range of products, including electronics, automotive parts, chemicals, food and beverages, alcohol, cosmetics and pharmaceuticals, and toys. Of the 53 concerns raised in this meeting, 18 were new, with the others recurring from previous meetings. Full list below.

Number of trade concerns raised per year in the TBT Committee 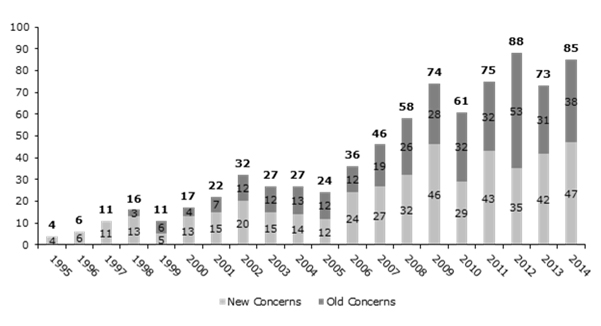 The TBT Committee meetings are also an important opportunity for cooperation between WTO members' regulatory counterparts on approaches to address shared policy objectives, including the protection of health and the environment (to name two of the most frequent types of measures dealt with by the Committee). Discussions help members consult and align standards and regulations before they become entrenched in legislation. Members also use the Committee to raise the “heat” on certain matters, to seek alliances or otherwise simply to provide an early warning that a measure currently being envisaged is likely to be problematic. The subject matter is detailed and technical in nature and driven by capital-based experts. Hence, the approach is rather more practical than legal. Engagement is wide — particularly by developing countries. Out of the 85 measures addressed in the 2014 discussion, developing countries expressed concern with respect to 63 of them (around 75 per cent). Although STCs are resolved in the TBT discussions, there is no formal procedure for the reporting on settlements, unlike in the WTO Sanitary and Phytosanitary Measures (SPS) Committee.

Currently, TBT Committee meetings span almost a full week, including bilateral consultations, thematic sessions on specific subjects (see below) and the formal meeting itself. Members have three regular meetings per year, and, interspersed between these, at least three informal preparatory meetings — usually about a month before the formal meeting.

In this meeting, although they came closer to finalizing a voluntary list of steps and mechanisms that may be used in developing and applying regulations — known as “good regulatory practices” — WTO members could not resolve the difference that emerged in June 2014 about whether a detailed disclaimer is needed to ensure countries are shielded from legal challenge in the WTO’s dispute settlement system.

Information is a vital part of dealing with technical barriers to trade. This latest in a series of “thematic” discussions (document G/TBT/GEN/174) included presentations on practices in conformity assessment — the various measures taken by manufacturers, customers, regulatory authorities and independent third parties to assess that a product or service meets standards or technical regulations.

An EU representative noted that in the European Union, conformity assessment and market surveillance — activities and measures taken by public authorities to ensure that products comply with the requirements set out in the relevant legislation for the protection of health, safety or other public interests — functions are strictly separated and the manufacturer or importer holds responsibility for the product liability.

A representative from South Africa reported on recent developments in Africa in the field of quality infrastructure, including the Pan-African Quality Infrastructure, which coordinates regional efforts on metrology, standardization and accreditation of conformity assessment services.

The National Institute of Standards and Technology (NIST) presented the Quality Infrastructure Council of the Americas launched by the Organization of American States (OAS) to ease access for OAS member states to internationally recognized quality infrastructure services.

The Bureau International des Poids et des Mesures (BIPM) presented the role of metrology in conformity assessment procedures as the “science and practice of measurement” and the importance for international trade of a common understanding and application of metrology worldwide.

Presentations were also made on regional and international initiatives to underline the importance of working together in various fora to promote good practice in regulatory cooperation and technical assistance.

The Asia-Pacific Economic Cooperation (APEC) reported on advancements in e-rulemaking, particularly the APEC Leaders' 2011 call for strengthening the implementation of good regulatory practices by conducting public consultations, ensuring internal coordination of regulatory work and assessing the impact of regulations.

A representative from New Zealand presented APEC's efforts to improve regulatory coherence, thus facilitating trade in wine across APEC countries, including a joint initiative by the WWTG and the APEC WRF.

The WTO Secretariat made a presentation on the Standards and Trade Development Facility (STDF), a global initiative to help developing countries establish and implement SPS standards towards health protection and increase their ability to gain or maintain access to international markets.

The full list of observer organizations working with the TBT Committee is here.