They also continued to discuss whether legal disputes should be heard on intellectual property issues when the agreement has not been breached — known as “non-violation” disputes. In this and some other issues their positions remained broadly unchanged.

Meanwhile, some called for a review of technical assistance that considers the actual impact of the assistance.

The five countries involved in five legal disputes with Australia over plain packaging for tobacco products urged other members planning similar measures to wait until the dispute ruling is published before introducing their own laws. Plain packaging or “standardized packaging” requires companies to use standard colours and typefaces instead of brand logos on packages, usually with large health warnings.

Ukraine referred to the bill currently in New Zealand’s parliament and notified or reported plans for similar rules in Ireland, the UK, France and Finland.

The five complaining countries are Ukraine (dispute settlement case DS434), Honduras (DS435), Dominican Republic (DS441), Cuba (DS458) and Indonesia (DS467). They observed that the panels examining the disputes have announced they will not be able to publish their conclusions at least until the second half of 2016.

Supported by Zimbabwe and Nicaragua, they said they support tobacco control. But they repeated their argument that plain packaging is excessive and fails to reduce smoking. They cited new studies, which they said show that the effect in Australia has been to encourage smokers to switch to down-market or smuggled products instead of to smoke less: “It is not working and it is not likely to work,” said Ukraine and Indonesia.

If governments had assessed individual trademarks to see whether their characteristics encourage smoking, some action might be justified, but a blanket ban on all trademarks violates the intellectual property rights agreement, Ukraine said.

Australia said it would not comment on the dispute but added that countries should not have to wait for the ruling before introducing their own laws. It defended plain packaging as legitimate and supported by institutions such as the World Health Organization and a large body of peer-reviewed research.

Support for plain packaging came from New Zealand, Norway, Canada, Uruguay, the EU and the World Health Organization (WHO). The EU noted that some of its members are considering the introduction of plain packaging requirements which is an option under the EU’s tobacco control policy (see notification G/TBT/N/EEC/380). It reported on WTO notifications from Ireland (G/TBT/N/IRL/1 and G/TBT/N/IRL/1/Add.1) and the UK (notification G/TBT/N/GBR/24). The EU itself has also been notified, it said, and the two have been holding domestic consultations on their plans.

The WHO said nearly six million people die globally because of smoking or inhaling “deadly” second-hand smoke, and that more than 70% of them are in low- and middle-income countries. Tobacco companies have shifted “aggressively” to new markets in developing countries where deaths attributable to tobacco are rising rapidly and by 2030 more than 80% of the world’s tobacco deaths will occur in low- and middle-income countries, the WHO said, adding that measures such as plain packaging are needed critically to deal with the problem.

The five complaining countries also announced that they have filed their first submissions in their disputes with Australia. This follows agreement in April among the six countries concerned to combine the five cases: technically they remain separate, with separate legal arguments, but they are being handled in a single process with a single set of panellists appointed in May forming the five panels. 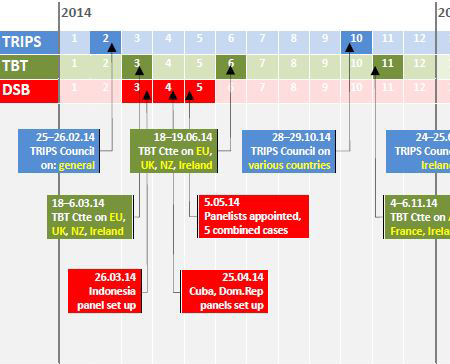 Continuing a series of discussions on innovation, members described their experiences in promoting innovation, this time with the emphasis on how universities, other institutions, inventors and companies can work together to produce goods and services that are socially and environmentally useful, including for developing countries. Some stressed the value of collaboration as a means of transferring technology instead of doing it by selling goods and services.

In parallel an innovation fair was organized at the WTO by Switzerland, the EU, the US and Mexico. They said the event aimed to help delegates link the issues they discuss in the TRIPS Council to real-world activities that result in products for treating water, improving the environment, meeting health needs and improving the quality of life.

In the meeting other countries that also shared their experiences included: Ecuador, Panama, Japan, Chile, Canada, Hong Kong China, Chinese Taipei, El Salvador and Australia. India and Brazil focused first on what they considered to be the cost of using patents, profit and monopoly rights as an incentive to innovate, before also describing their own promotion programmes.

Members’ positions on this technical legal issue remained unchanged even though the discussion dug deeper into WTO jurisprudence and the intentions of the drafters of the TRIPS Agreement.

A non-violation case arises in the WTO when one country challenges the legality of another’s actions, if it feels it is deprived of an expected benefit — even if no actual agreement or commitment has been violated. Non-violation disputes are allowed for goods and services, but not in intellectual property under a temporary agreement (a “moratorium”) that has been extended several times. The most recent two-year extension was agreed at the Bali Ministerial Conference in December 2013.

The US and Switzerland continued to argue that non-violation cases should be allowed and that a consensus is only needed to extend the moratorium.

A number of other countries maintained their view that non-violation cases have no place in intellectual property because the TRIPS Agreement is not about market access. Some of them also argued that a consensus is needed on how to handle non-violation cases (the “scope and modalities” of doing so) before the moratorium can end. In this meeting, these speakers included: Venezuela, Brazil, India, Cuba, Ecuador, Colombia, China Argentina, Chile, Bolivia, Rep. Korea, Chinese Taipei, Canada, New Zealand, Bangladesh, Egypt, the African Group (Nigeria speaking), Hong Kong China, and Nepal.

Japan repeated its position that members should examine the “scope and modalities” based on facts.

Making better use of information

Information from members is key to the work of the WTO’s committees, including the TRIPS Council. The Secretariat is working on ways to make the vast amount of information that members have shared with each other through the TRIPS Council easier to access and to retrieve, members heard.

This is important because one of the TRIPS Council’s key roles is to review how well the TRIPS Agreement is being implemented. The information provided through notifications can also serve to raise awareness about some policy options that are made available to operators on the ground, such as those on intellectual property and health.

The envisaged improvement would make the information available in a form that is easier to use or to search than simply from a collection of lengthy documents, the Secretariat said. Among the first steps is to ask members to submit some of their information in the form of tables, for example on technical assistance.

The information under “notifications” is principally members’ intellectual property laws and any amendments. This has now reached around 4,500 documents totalling 1.8 terabytes of computer space, mainly in the form of texts or scanned images of texts. Other information includes the technical assistance that members provide and, for developed countries, the incentives they give for technology transfer.

This is against a background of an unprecedented level of law-making and policy-formulation on intellectual property in many countries.

In this meeting, new member Tajikistan introduced its laws and the council followed up on a similar exercise for Russia, which joined the WTO in 2012. Montenegro introduced a notification on a major amendment to its trademark law, which it described as being based on EU law and part of the preparation for its EU membership bid. Bahrain, Colombia, Rep. Korea, Russia and Panama updated members on latest developments.

Korea described steps it has taken to implement compulsory licensing for the export of medicines to meet the health needs of other countries, giving effect to the WTO’s system of special export licenses set up following the Doha Declaration on the TRIPS Agreement and Public Health.

Russia outlined a wide range of intellectual property legislation it has recently passed, including to help people with disabilities to use copyright works and to deal with protection of material on the internet.

Panama presented a number of updates to its intellectual property system, which encompassed electronic procedures for trademarks and the availability of alternative dispute settlement avenues for disputes over industrial property.

The EU also commented that the discussion of technical assistance should move on from the focus on formats to the impact of assistance programmes. For example, the EU has provided assistance on tides and water in Bangladesh and on malaria in pregnancy in Africa and would like to hear feedback, it said. Bangladesh said it would be prepared to participate in a discussion of this kind.

The “paragraph 6” review: In this annual review, members broadly repeated their positions on how they see the system, which allows governments to issue compulsory licences, bypassing some patent rights, for pharmaceuticals to be exported to countries that cannot make the medicines themselves. Some argued that the conditions are too cumbersome, resulting in the system only being used once — generic medicines made in Canada and exported to Rwanda. Some of them repeated their call for a workshop involving a range of stakeholders.

Others repeated their view that patents are only part of the picture on access to medicines and that Canada-Rwanda example shows that the system is working and that its conditions only involve a small amount of time when compared to other steps that are taken. They said that they had asked countries wanting to use the system to explain the problems they face, but there had been no replies. Until that information is available, the discussion should stay in the TRIPS Council and not in a broader workshop, they said.

Many delegations, including the group of least-developed countries, also repeated their call for those members that have not yet accepted the TRIPS amendment, to do so swiftly. Since the last meeting, Botswana and Uruguay have accepted the 2005 TRIPS Agreement amendment, bringing the total “instruments of acceptance” to 53. This includes one from the EU, which has 28 member states and is also one of the WTO’s 160 members in its own right. When two thirds of the WTO’s membership have accepted the amendment, it will take effect in those members that have accepted it. In the meantime, the 2003 “waiver” already contains the same provisions as the amendment and will remain in place until the amendment is accepted.

Meanwhile, the least developed countries (Bangladesh speaking) asked for the next meeting in February 2015 to discuss extending their 2016 deadline on pharmaceutical patents. (This is separate from the deadline for protecting intellectual property in general, which was extended in 2013 until 1 July 2021.)

The “triplets” of issues related to the UN Convention on Biological Diversity (CBD). Members’ views also remained unchanged on this long-running set of issues. They continued to differ particularly on whether the TRIPS Agreement needs to be amended to require patent owners to disclose the source of the genetic resources and related traditional knowledge used in their inventions. And they also continued to differ on whether the CBD Secretariat should brief the council.