The meeting, held at the request of Consumers International, is the first event to be organized solely for consumer organizations as part of the WTO's "Trade Dialogues" initiative. It brought together 15 representatives of consumer organizations from around the world in addition to a number of private sector representatives. Participants discussed consumer issues in the trade arena, focusing in particular on the challenges and opportunities provided by e-commerce and how the WTO can help address consumers' concerns in this area.

Opening remarks were delivered by WTO Director-General Roberto Azevêdo, the Director-General of Consumers International, Helena Leurent, and the Chair of the WTO's General Council, H.E. Sunanta Kangvalkulkij. These were followed by a focused discussion on electronic commerce chaired by Ms Leurent.

"We are very conscious of the duty we have to consumers, and the need to ensure that trade functions in a way that is good for all. The voices of consumers must therefore be heard in the trade debate – especially at this crucial moment where trade tensions are rising and governments are discussing potential reforms to the trading system. "

"Consumers are central to the success of trade and it is in everyone's interests that their voices are heard in the development of trade rules. With the growth of e-commerce, consumers are becoming active participants in international trade and it is more important than ever to build a trading system that consumers can trust. These trade dialogues are a good start towards an open process that will allow consumer advocates to engage with negotiators and ensure the consumer perspective is heard."

"We, the WTO members, are of course those that discuss trade issues in the WTO, but these discussions must be in sync with the issues which are important to the businesses, to the public, and to the consumers. Your engagement needs to play a role in shaping up trade discussions on all the issues that are of importance to members."

The opening session of the meeting looked at the importance of consumer groups' engagement with governments to ensure that their concerns are heard in the trade debate. Participants expressed interest in the ongoing work at the WTO, in particular in the negotiations on fisheries and agriculture. They also heard updates on the work conducted at the WTO on electronic commerce. A summary of the issues raised at the meeting during their discussion of these topics is available here.

At the final session, the discussion leaders presented the main messages from the morning sessions to WTO members, DG Azevêdo and the General Council chair, Ambassador Kangvalkulkij.

The consumer organizations and businesses participating in the event were:

The first "trade dialogues" were held at the WTO in May 2016 and June 2018 at the request of the ICC and the B20, the business arm of the G20. Both meetings identified a number of pressing issues for the business community. The ICC and B20 subsequently submitted their recommendations to the WTO. 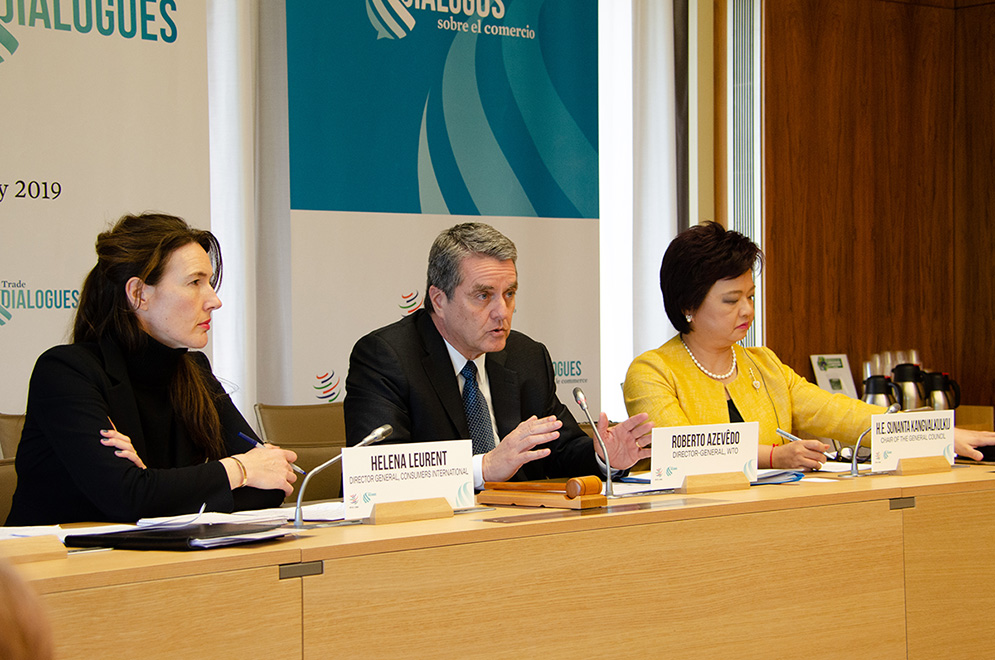