The meeting with Amb. Tai wrapped up the Director-General’s four-day mission to Washington DC. Accompanied by her Deputy Director-General Angela Ellard, Dr Okonjo-Iweala had met with U.S. Treasury Secretary Janet Yellen, the chairs and ranking members of the House Ways and Means and Foreign Affairs Committees as well as the chair and ranking member of the Senate Finance Committee. The Director-General also met with members of civil society and the business groups, the Agriculture Coalition for WTO Reform and Women in International Trade. While she was in Washington, she was presented with the National Foreign Trade Council Foundation’s prestigious World Trade Award.

At every occasion, the Director-General stressed the importance of reforming the WTO and reinforcing the multilateral trading system to better meet 21st century challenges like climate change, battling the COVID-19 pandemic and warding off a food crisis brought about by the war in Ukraine. She noted that the multilateral trading system is a global public good which has delivered over time. Retreat from multilateralism into a system of competing and perhaps adversarial trading blocs would diminish the flow of technology, create inefficiencies and shave as much as 5% off global economic growth, she explained. Instead, she said, WTO members should pursue a policy of re-globalization which uses the trading system to bring in those who have been left behind.

The discussion with Amb. Tai revolved around the US objectives for the 12th Ministerial Conference (MC12) to be held on 12-15 June in Geneva. There was discussion on efforts to gain agreement on the WTO’s response to the COVID-19 pandemic including intellectual property, on disciplines to curb harmful fisheries subsidies and efforts to reform the organization. So-called level playing field issues pertaining to industrial subsidies were also discussed. The Director-General explained to Amb. Tai that while the war in Ukraine had produced challenges in carrying out negotiations, alternative procedures had been implemented, decisions were being taken and it was still possible that MC12 could produce meaningful results.

“We have a challenging few weeks ahead of us and if we are to make progress, US leadership will be essential. Amb. Tai and I had an excellent discussion on the prospects for MC12 and what the United States would like to see in terms of inclusive outcomes that deliver for all,” the Director-General said.

The meeting with Secretary Yellen centred on WTO reform, climate change, the global economy and the disruption to global supply chains brought about by the COVID-19 pandemic and by the war in Ukraine.

In her meeting with US agriculture producers, the Director-General expressed her strong concerns about the impact of the war on trade in food, fertilizer and energy. While Russia and Ukraine combined account for less than 3% of global exports, they supply 25% of global wheat exports, 15% of barley exports and 45% of sunflower product exports. Dr Okonjo-Iweala explained that the closure of trade from the Black Sea could provoke a global food crisis, with countries in Africa and the Middle East most adversely affected. She sought advice from the agricultural groups on how best to ensure adequate supplies of food in the near future.

The issue of supply chain resilience was also on the table and the Director-General stressed that trade had been a crucially important tool in providing medical supplies — including inputs for vaccines — during the height of the pandemic. While it is understandable and prudent for companies to look for ways to diversify their supply chains and reduce dependency on certain types of supplies, she said this objective could not be met without trade.

On Capitol Hill, the Director-General listened to views on WTO reform including reform of the dispute settlement system and discussed how best to move forward on intellectual property issues pertaining to access to vaccines against the COVID-19 pandemic. She underscored her commitment to reform of the WTO and explained how the organization was meeting some of the challenges that have arisen since the outbreak of the war. 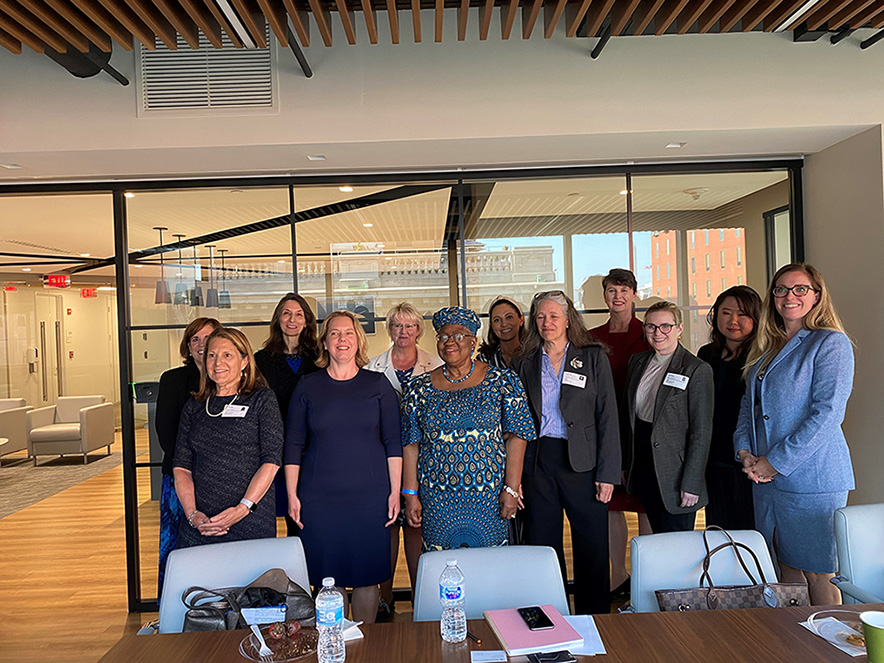