Mr President of the State Council,

Mr President of the Grand Council,

Dear representatives and Members of the WTO,

Greetings, and welcome to the WTO.

Today, we are inaugurating the new WTO campus. Since its completion in 1926 as the ILO headquarters, the Centre William Rappard has been home to different occupants and has undergone a series of modifications and expansions. This latest round of renovations is the result of a project aimed at uniting the whole WTO Secretariat under one roof.

Before starting, I would like to invite you to watch a short video that retraces the work that has gone into renovating and expanding the WTO site.

Today's ceremony marks the end of a process that began when I first took office in 2005, when we decided to abandon the project to build a second, separate WTO site on the Avenue de France in favour of a single site for the WTO Secretariat, under one roof. This made sense for a working community whose jobs are to a great extent interlinked with one another.

It took about three years to negotiate a new arrangement with our Swiss hosts, and on 1 August 2008, the WTO and the Swiss Confederation signed a memorandum of understanding on the long-term housing needs of the WTO. The renovation work started that same year and — as we saw in the video — in September 2011, we laid the foundation stone for the new building.

Five years since the works began, we can finally enjoy our new premises. It is remarkable that, despite some predictable political, technical and procedural differences, this ambitious project was completed within the agreed timeline and, even more importantly, strictly within the allocated budget.

We are celebrating the end of three main projects conducted together: the renovation of the old building, it's densification, and the construction of an extension. These projects have now provided a single home for the WTO, it's staff and its Members.

The new, enlarged WTO campus maintains traces of the past, while at the same time looking towards the future. It combines the highest technological standards, in terms of functionality and environmental sustainability, with respect for this remarkable site's long history and surroundings. A number of rediscovered works of art have been restored and incorporated in the new design and will continue to bear testimony to the valuable heritage that this site represents.

Next to the historical WTO headquarters, the new, modern building blends gracefully both as a physical extension of the old site and within the natural landscape of park that surrounds us. This new building project has made no attempt to imitate the pre-existing building structure.

Rather, we have tried to achieve harmony between the new construction and the old building: continuity in time and space. In time, between the past, the present, and the future; and in space, continuity with the exceptional natural surroundings. Its light structure and straight lines are an expression of transparency and flexibility, but also reflect the solidity and international character of the WTO. They also convey openness: openness of trade, and openness to the public, since we wanted to avoid enclosing the WTO behind bars. This is why the restaurant will be open to the public starting next autumn.

Different styles, but common thinking: an image, as it were, of the kind of international system the 21st century needs.

Just as for the daily work of the WTO, the construction project has required dialogue, collaboration, and sometimes negotiation between a number of different players. As we complete the construction work, I want to extend my most sincere thanks to all those who have helped us throughout this process. I will not name them all — the list would be too long — but I would like to mention certain people and certain institutions whose contribution to the success of this undertaking has been crucial.

I would like first of all to thank the Swiss Confederation and its Federal Council, represented today by our friend Mr Johann Schneider-Ammann, for approving and supporting the project. Let me also pay special tribute to Ms Micheline Calmy-Rey who — after prolonged discussions — was kind enough to share my vision and who advocated our cause in Bern.

I would also like to thank the Swiss Mission in Geneva, in particular Ambassador Alexandre Fasel, Ambassador Amadeo Pérez and their predecessors, whose engagement was equally crucial.

A special thanks also goes to the City of Geneva, its Administrative Council and its Mayor, Ms Sandrine Salerno, whose commitment to the international vocation of this city has made an important contribution to the project's success.

My thanks also go to the FIPOI, its Director, Mr François Reinhard, and his team, in particular Mr Gilles Pricaz, for their invaluable collaboration and direct involvement in all three projects. Without their support, this project might have never been implemented.

This ceremony gives me the opportunity to thank the WTO Members as well — here represented by Ambassador Bashir, Chair of the General Council — for their confidence, their patience, and their support. I hope they will find in the renovated site a more comfortable and efficient working space, responsive to their needs and beneficial to the working relations between experts from the different countries and the Secretariat.

Let me also thank the architects whose creativity and professionalism translated our vision into reality. Special credit goes to Mr François De Marignac and Mr Oscar Frisk of Group8, as well as their team, for the renovation of the old WTO building. In particular, the new atrium which they designed has met with unanimous approval. For the design of our new building, my thanks go to Mr Jens Wittfoht and to his assistant Mr Thomas Kindsvater. In this regard, I would like to remind you that at 2 p.m. Mr Wittfoht will give a presentation on the construction of the new building. I invite you to attend his presentation.

A word of thanks also to Pom+ and, in particular Mr Stéphane Maye, who has helped manage the project, and to the building companies: Techdata, HRS, Implenia and all their subcontractors, who have worked under all kinds of weather to ensure that the job was completed on time and within budget.

My special gratitude also goes to the people of Geneva for the support they showed in the 2009 referendum. My sincere thanks, in this regard, goes to the group of young professionals gathered behind the Action pour la Genève Internationale et son Rayonnement (AGIR), and to the Fédération des entreprises romandes, who four years ago mobilized their support to advocate for the extension of the Centre William Rappard. Their steadfast support was decisive in raising awareness amongst the people of Geneva.

Finally, I wish to thank all the WTO staff, who have patiently endured the noise and disruption caused by the constructions. A special mention goes to all support staff in the Administration and Technical Services Division, in particular the logistics and technical services staff, who have tirelessly worked throughout the construction period and helped keep disruptions to a minimum. And my thanks also goes to Deputy Director-General Rufus Yerxa and to Victor Do Prado.

When I recruited Victor as a deputy to Arancha in 2005, my intention was to use his expertise in trade defence instruments — but for the past eight years, two thirds of our conversations have been devoted to different construction techniques rather than trade defence. I have always wanted to have multi-purpose teams, and with Arancha and Victor I can hardly complain. Without them we would not have been able to see the project through.

The new WTO campus is the result of the efforts of all involved. We have sometimes faced difficulties, but the result shows that it was all worth it.

Before closing, let me invite you to visit the new and renovated site of the WTO and discover some of the historical, artistic and institutional treasures that we have uncovered. After the ceremony, WTO staff members will give guided tours of the building and its grounds. I wish to personally thank them for being here and volunteering their time to the organization of this event.

I hope you enjoy this unique experience, and I wish you the best of luck for the WTO Open Day and for the years to come. 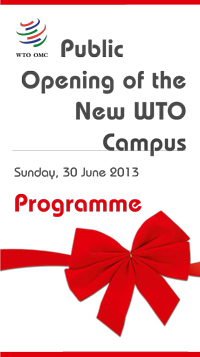