HANDBOOK ON ACCESSION TO THE WTO: CHAPTER 4

The accession process  the procedures and how they have been applied

The format and the conduct of each individual accession negotiation are based on the procedures laid out in WTO document WT/ACC/1 entitled Accession to the WTO  Procedures for Negotiations under Article XII, which was drawn up by the Secretariat shortly after the WTO was established on 1 January 1995.44 These procedures were modelled after those followed by the Contracting Parties to GATT 1947, including the Complementary Procedures on Accession Negotiations agreed to by the Council of GATT 1947 in 1993 and the statement by the Chairman of the Council of GATT 1947 on the Management of Accession Negotiations in 1994.45 The draft of the procedures was prepared by the Secretariat and revised in the light of suggestions made during extensive multilateral consultations with interested WTO Members, during which an understanding was reached that the document would not be submitted to the Ministerial Conference/General Council or individual Working Parties for formal endorsement but that it would rather serve as a practical guide for existing WTO Members and acceding governments and not as a general policy statement on accession negotiations.46 Box 2 outlines the main steps in the process. 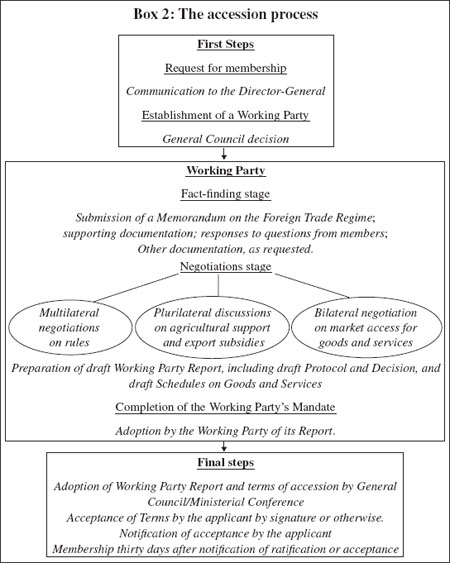 A glance at this schematic presentation suggests that the process of accession inevitably takes time. The length of time between application and actual accession has varied from two years and ten months47 to 15 years and five months.48 Six applicants that converted a request to join GATT 1947 into a request to accede to the WTO when it was created in 1995 have still not completed the process. Document references to the Reports of Working Parties on applicants that have already acceded and fuller details of the timeline for completed accessions will be found in Annex 5.

Acceders must also be prepared to submit, and to deal with, a complex range of documents. These are issued in two series: Working Party documents (the WTO document WT/ACC/*  series) and documents relating to the negotiations on rules (draft Reports), market access for goods and services, including for the negotiations and discussions on agricultural support and export subsidies (WTO document WT/ACC/SPEC/*  series). These can be consulted, when released, on the WTO website.49