The issue of WTO reform is a broad one, encompassing many facets of the WTO's work. The debate over WTO reform is nothing new. Almost from the organization's inception, members have been thinking about how the WTO could be improved and respond more effectively to the challenges facing the multilateral trading system. However, the push for WTO reform has gained momentum in recent years, reflecting the four general concerns outlined below.

More than 30 submissions have been made by WTO members or, in many cases, groups of WTO members addressing the issue of WTO reform, either horizontally or on specific topics. One of the early proponents for WTO reform was the Group of 20 leading economies. At their Buenos Aires summit in late 2018, G20 leaders issued a statement acknowledging that the system “is currently falling short of its objectives and there is room for improvement”. In subsequent summits, G20 leaders reaffirmed their support for reform of the WTO to improve its functions and pledged to work constructively with other WTO members on the matter, including in the lead-up to the 12th Ministerial Conference (MC12).

To date, the submissions on WTO reform have been discussed in the regular meetings of the General Council as well as within the various councils and committees where issue-specific proposals have been presented. In a draft MC12 outcome document circulated on 9 June, the WTO's General Council would be charged with overseeing the work on WTO reform post-MC12, reviewing progress, and considering decisions for submission to the 13th Ministerial Conference.

In remarks made at a General Council meeting in July 2021, General Council chair Ambassador Dacio Castillo (Honduras) noted that in his consultations with members on the issue, several delegations said the question of WTO reform needed to be addressed at MC12 and reflected in an outcome document. He also noted that some delegations noted the suggestion of establishing a working group on WTO reform to discuss issues of relevance including, but not limited to, the WTO negotiating function, notifications and monitoring and a number of institutional improvements.

WTO Director-General Ngozi Okonjo-Iweala told the General Council the following  October that discussions among key WTO members and groups of members showed a willingness to work on these reforms but that differences remain on what reform is and what it should be. Members need to address what reform of the basic functions of the WTO entails and what process needs to be put into place, she noted.

At an informal TNC/Heads of Delegation meeting on 4 May, General Council chair Ambassador Didier Chambovey (Switzerland) said delegations acknowledged the need to further advance and close remaining outstanding areas in a draft MC12 outcome document from the previous year, including on the issue of WTO reform.  The Director-General also urged members to focus on a process going forward to achieve WTO reform and that, at a minimum, members should agree on such a process at MC12, with the aim of delivering results by the 13th Ministerial Conference.

At meetings of the WTO's Dispute Settlement Body, more than 120 members have issued a joint call for the selection process to be started forthwith; many of these members have warned that the continued impasse on the appointment of new Appellate Body members not only undermines the WTO's dispute settlement system as a whole and the credibility of the WTO itself, but also denies all WTO members their legal right to a binding, two-stage dispute settlement process which is a fundamental pillar of the WTO system.

To overcome the impasse, the General Council chair Junichi Ihara of Japan appointed Ambassador David Walker of New Zealand in January 2019 to assist him in working with WTO members to resolve their differences. Following a year of informal consultations with members, Amb. Walker presented members in December 2019 with a draft decision on the functioning of the Appellate Body, based on inputs received during the informal process. The decision however failed to secure consensus support, with the US voicing its objection.

To overcome the Appellate Body impasse, a group of 24 members plus the European Union have established a “multi-party interim appeal arrangement” (MPIA) whereby any panel ruling in a dispute where both parties are MPIA participants can be reviewed by independent arbitrators operating in line with dispute arbitration provisions under Article 25 of the WTO’s Dispute Settlement Understanding (DSU), To date, no decisions have been issued by MPIA arbitrators, although parties in several disputes have agreed to resort to these procedures if and when the dispute approaches the appeals phase  In one dispute, the two parties have agreed to separate appeals procedures under the arbitration provisions of Article 25 of the DSU.

WTO members are subject to notification requirements under many of the WTO agreements with regards to new laws, regulations and measures affecting trade. Some members have been raising concerns in the various WTO councils and committees about what they describe as the “chronic” low level of compliance with existing notification requirements, which impedes the ability of WTO members to review and assess the policies of members and negotiate new rules. The concerns are particularly acute in regard to notifications on agricultural and industrial subsidies.

As a result, several members have submitted proposals to improve compliance with notification requirements. Nineteen WTO members plus the European Union have endorsed a proposal calling for improving members' compliance with notification obligations and assisting developing members having problems meeting their notification obligations. A revised proposal backed by 23 members plus the EU was circulated on 28 April 2022.

A number of developing countries and least developed countries have voiced opposition to the initiative, arguing that capacity constraints rather than political will are preventing poorer members from fulfilling their full notification obligations and that the proponents' proposal would lead to new reporting obligations not set out under the WTO agreements. The African Group, Cuba, India and Oman have put forward a submission noting their own concerns regarding transparency obligations on issues of concern to developing countries, such as measures promoting and encouraging transfer of technology to least developed countries (LDCs).

Several WTO members have questioned the WTO practice of “self-designation” whereby a member can declare whether or not it is a developing country. Developing countries benefit from special and differential treatment (S&DT) provisions, such as longer implementation periods to comply with WTO commitments, flexibility of commitments, of action and use of policy instruments, and access to technical assistance. More than two-thirds of WTO members have self-designated themselves as developing countries or are classified as least developed countries in line with United Nations criteria.

In January 2019, the United States put forward a paper criticizing the practice of self-designation. The US put forward a subsequent proposal which calls for excluding all OECD members, all G20 members and all members classified as “high income” by the World Bank from self-declaring as a developing country.

While several developed members have voiced support for revisiting self-declared developing country status, a number of developing countries have sharply criticized the initiative. China, India and others issued a joint paper stating that  the gap between developed and developing members appears to have widened over time, thus justifying the continued need for S&DT. These members also argue that any attempt to dilute S&DT by denying self-declaration would conflict with the WTO's fundamental premises of equality and fairness.

In a subsequent statement issued in October 2019, the African Group of WTO members, China, India and several others reaffirmed the principles of developing countries' continued unconditional right to S&DT in WTO rules and negotiations, the right to self-designation, upholding existing S&DT provisions; and the provision of S&DT in both current and future negotiations.

A smaller group of developed and developing members issued a middle ground paper in April 2019, arguing for a “creative and effective approach” to S&DT  flexibilities that respond to the development needs of members and enable their fuller participation and at the same time contribute to an appropriate balance of rights and obligations among WTO members.

In February 2022, the African Group, India and Cuba circulated a communication on strengthening the WTO to promote development and inclusivity. The proponents said the priorities for WTO reform must include, among other things, strengthening the multilateral character of the WTO, reaffirming the principles of S&DT and keeping development at the organization's core.

Reinvigorating the negotiating function and deliberative capacity of the WTO

A group of 13 WTO members have issued a joint statement calling for the WTO's negotiating function to be reinvigorated in order to ensure the continued relevance of the organization. These “Ottawa Group” members in particular cited the need to safeguard and strengthen the WTO's dispute settlement mechanism as a central pillar of the WTO, updating WTO rules to reflect 21st century realities, addressing modern economic and trade issues and tackling pending and unfinished business. The group said this may require flexible and open negotiating approaches towards multilateral outcomes, and they welcomed the work undertaken through the Joint Statement Initiatives from MC11 in Buenos Aires.

The Ottawa Group issued a subsequent joint statement announcing their intention to begin consultations with all interested members to develop collective proposals on a cross-cutting and committee-by-committee basis in order to improve the WTO's deliberative and monitoring functions and solve trade concerns without litigation.

Twenty WTO members have separately proposed strengthening the ability of regular WTO councils and committees to facilitate the effective consideration of such trade concerns by equipping them with horizontal procedural guidelines and streamlined meeting arrangements.

The LDC Group of WTO members outlined its views on WTO reform discussions and proposals in a December 2019 submission. The LDC Group said WTO reform should take full account of the widespread capacity constraints of LDC members and ensure inclusive negotiating processes and consensus-based decision-making. A revised version of the proposal was circulated on 28 April 2022 with updated observations due to new developments and the COVID-19 pandemic. The African Group has also circulated a Declaration on WTO Issues adopted by African Union trade ministers in December 2018.

China and Canada have also circulated individual position papers on WTO reform. China cited the need for specific actions to resolve crucial and urgent issues threatening the existence of the WTO, increasing its relevance in global economic governance and improving the operational efficiency of the WTO. Canada has called for strengthening the deliberative function of the WTO councils and committees, with a focus on improved information sharing about domestic measures and their impacts, improving the capacity and opportunity for deliberation, and improved opportunities and mechanisms for addressing specific trade concerns. 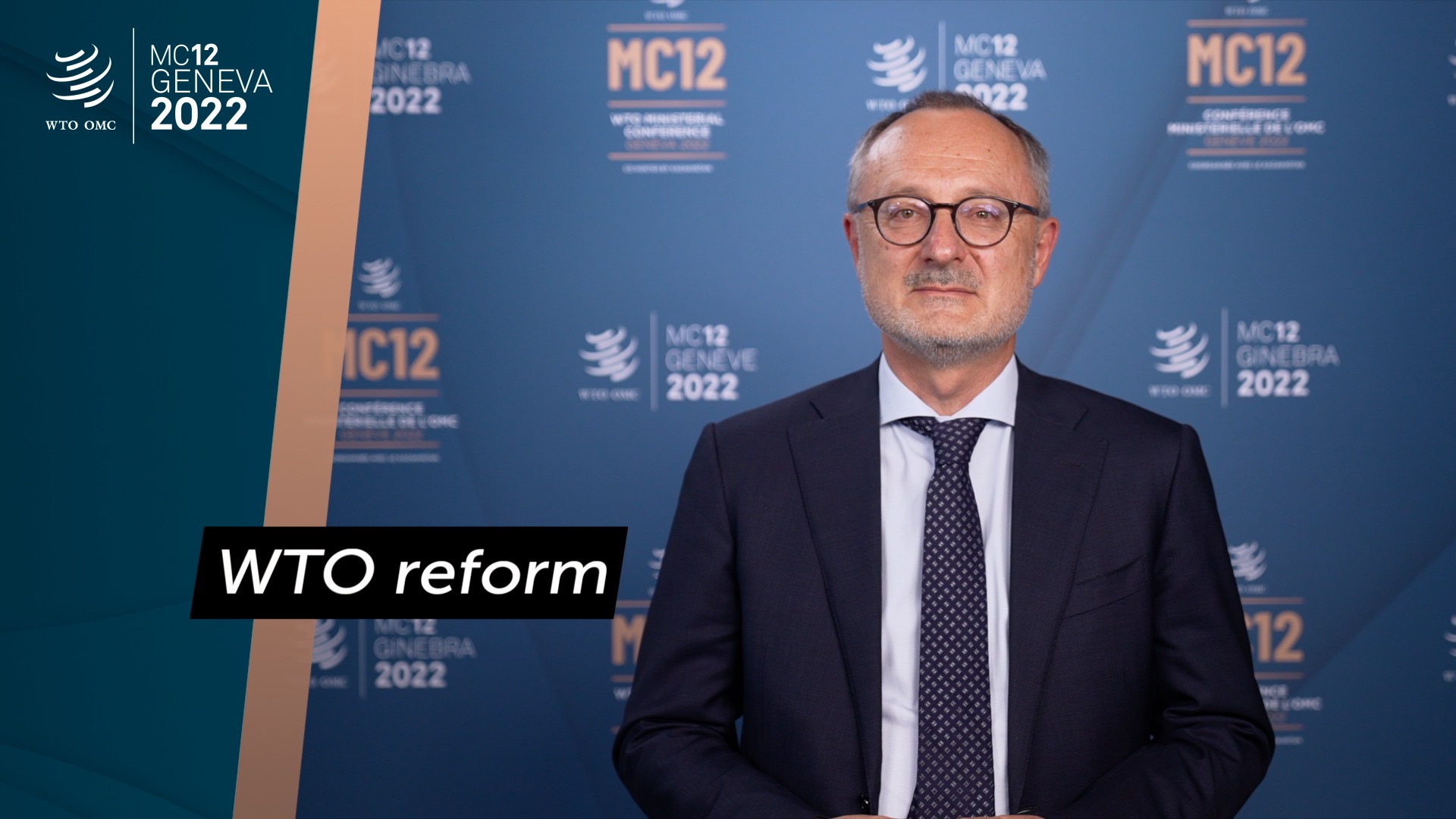