The discussions took place in consultations held regularly since 2004 under a programme formally called the WTO “Director General’s Framework Mechanism on Cotton”. These meetings are separate from the negotiations on reforming cotton trade under the Doha Round agriculture negotiations, but both are mandated under the 1 August 2004 General Council decision in the Doha Round — paragraph 1(b) — and the 2005 Hong Kong Ministerial conference. 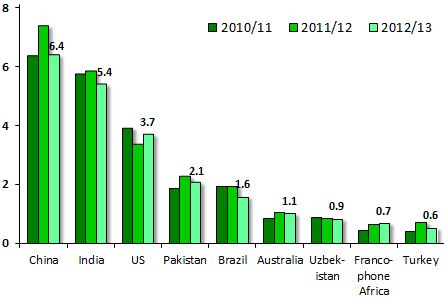 In this meeting, members heard that the total amounts spent on completed assistance for cotton since 2005 is $287m. Another $92m has been spent on on-going programmes worth a total of $310m in promised assistance.

A further $1.4bn has been spent on completed or continuing projects for agriculture and infrastructure in these cotton producing countries, with a total of $5bn committed.

The information is compiled in a document that is regularly updated, an “evolving table” now in its 13th version (document WT/CFMC/6/Rev.12 of 31 May 2012).

The meeting heard reports from donors, and from South-South development partners Brazil, India and China. Some described how the assistance is used to improve cotton production in Africa and elsewhere.

“South-South Cooperation has emerged as a key aspect of the implementation of the mandate on the development assistance aspects of cotton and our work in this forum,” concluded Deputy Director-General Harsha Vardhana Singh, who chaired the meeting.

“I can report to you that there is great interest with this dimension of our work. The significant contributions of Brazil, China and India as well as Pakistan, are acknowledged with appreciation.”

The countries receiving the aid welcomed it and described its value to them. But they also noted the gap between the assistance that has been committed and the aid actually delivered and called for more coordination and further improvements in sharing information. 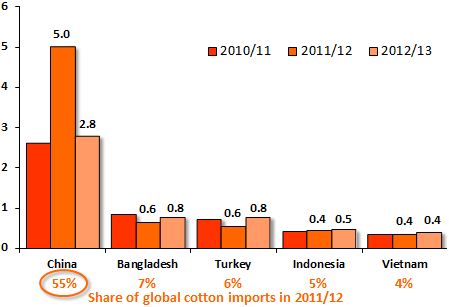 The Secretariat proposed to address the request for further changes in the information it compiles in order to allow the quality of projects to be assessed as well as the quantity.

In this meeting, capital-based officials — the “focal points” — from the Cotton-4 proponents of cotton trade reform (Benin, Burkina Faso, Chad and Mali) were present, exceptionally, thanks to financial support from China.

Meanwhile, the negotiations on cotton have seen little progress since the April 2011 “Easter Package” of latest drafts was compiled and circulated, the chairperson of the agriculture negotiations and cotton sub-committee reported.

Ambassador John Adank of New Zealand said he has held consultations with delegations on how to proceed with the agriculture and cotton talks, but without anything new to report because some members are unready to move on cotton until the overall agricultural negotiations progress further.

However, he described as positive, ministers’ agreement to include a section on cotton in the “Elements for political guidance” issued at the Geneva Ministerial Conference in December 2011 (paragraph 4 under “Trade and Development”), the only agricultural product to be highlighted in it. 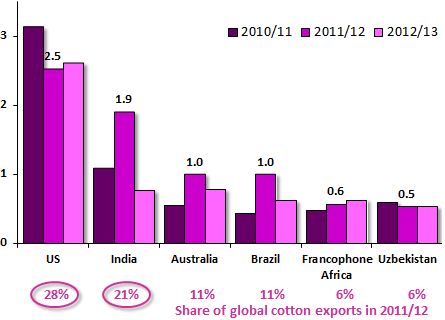 Also positive were announcements by some ministers on additional development assistance for cotton and by one member on giving duty-free, quota-free access to their markets to upland cotton imports from least developed countries, he said.

African and other countries pushing for reform said they were disappointed at the lack of progress in the talks. These included the Cotton-4 proponents of cotton trade reform (Benin, Burkina Faso, Chad and Mali — Burkina Faso speaking), the least developed countries (Haiti speaking), the African Group (Nigeria speaking) and the G-20 alliance of developing countries in the agriculture negotiations (Brazil speaking for the group and on its own behalf).

Concern about US Farm Bill

The Cotton-4 reported on their ministers’ visit to Washington just over a week ago, to meet members of the US Congress and administration, and express their concerns about proposed cotton subsidies in the US Farm Bill, which passed the Senate on 21 June 2012 and is now being discussed by House of Representatives.

Some others shared the concern, particularly as cotton prices are falling, raising the prospect of subsidies rising again. One was Brazil, which referred to its continuing consultations with the US within their “Framework Agreement” for an agreed solution to the legal dispute on cotton subsidies (case DS267), which concluded that the US had violated WTO agreements and its commitments by subsidizing cotton. The consultations are part of a package that includes US development assistance to Brazil, part of which Brazil uses to provide assistance to African producing countries.

Cotton prices
US cents per pound 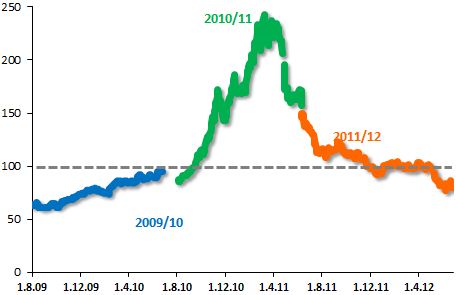 Prices are also less volatile than during the peak, now returning to fluctuate within the narrower range of 20–25% above and below the average for the season, compared to double that range in 2010/11, ICAC said.

The decline in prices is notably attributed to increased production, as farmers responded to recent high prices —now exceeding consumption — and to competition from polyester, it said.

ICAC also said that French-speaking Africa’s yields (kg of cotton produced per hectare) are falling when globally they are rising.

Proposed: before the final meeting of the General Council in 2012