Disclaimer
The pages on this web site regarding the Appellate Body and the Appellate Body Secretariat are intended solely for information. These pages do not constitute an authoritative interpretation of the WTO Agreements, including the Understanding on Rules and Procedures Governing the Settlement of Disputes, or the Working Procedures for Appellate Review.

VIDEOS
back to top

Appeals in the WTO dispute settlement system
This link takes you to the section on disputes in the WTO guide “Understanding the WTO”.

Appeals are conducted according to the procedures established under the DSU and the Working Procedures for Appellate Review.

Guidelines in Respect of Executive Summaries of Written Submissions

9 September 2019: Thailand filed a Notice of Appeal in Thailand — Customs and Fiscal Measures on Cigarettes from the Philippines (Article 21.5 — Philippines II) (WT/DS371/RW2).

9 January 2019: Thailand filed a Notice of Appeal in Thailand — Customs and Fiscal Measures on Cigarettes from the Philippines (Article 21.5 — Philippines) (WT/DS371/RW).

14 December 2018: India filed a Notice of Appeal in India — Certain Measures on Imports of Iron and Steel Products (WT/DS518/R).

20 November 2018: Panama filed a Notice of Appeal in Colombia — Measures Relating to the Importation of Textiles, Apparel and Footwear (Recourse to Article 21.5 of the DSU by Colombia and Panama) (WT/DS461/RW).

21 September 2018: The European Union filed a Notice of Appeal in European Union and its member States — Certain measures Relating to the Energy Sector (WT/DS476/R).

The Reports of the Appellate Body for individual appeals.

Annual reports on the work of the Appellate Body and its Secretariat have been issued since 2003.
Click here for more information 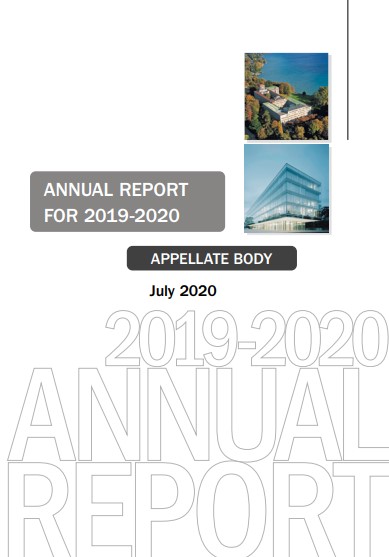