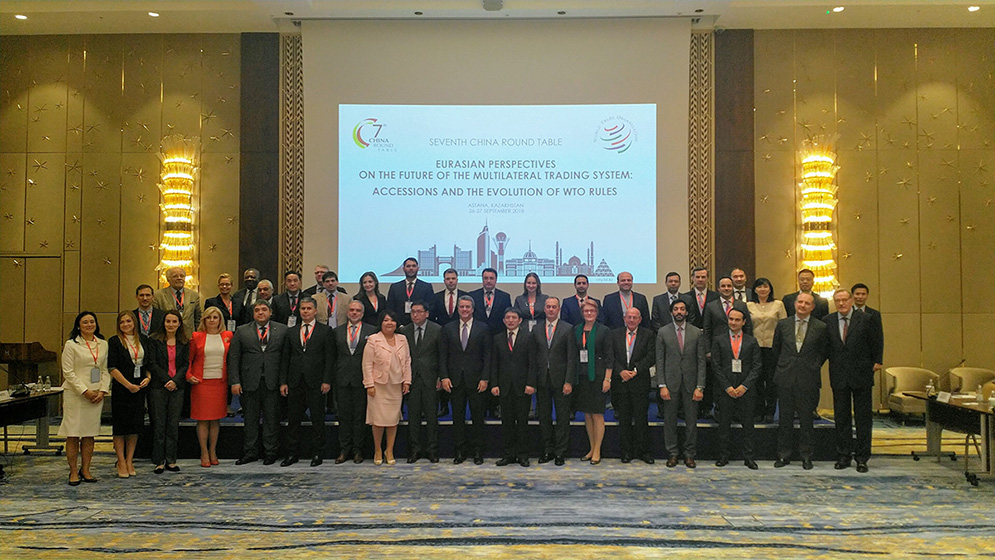 The Seventh China Round Table is funded by the Government of China, hosted by the Government of Kazakhstan, and organized by the WTO Secretariat, as part of the agreed activities under the China-WTO MOU. Please note that on 28 September the participants of the China Round Table will be invited to attend the High-Level Forum on Trade and Investment Facilitation for Development: A Eurasian Perspective, hosted by Kazakhstan in partnership with the WTO Friends of Investment Facilitation for Development (FIFD).

For questions and inquiries on the Seventh China Round Table, please contact co-coordinators:

EURASIA IN THE GLOBAL ECONOMY AND THE MULTILATERAL TRADING SYSTEM

Eurasia extends its vast geographical landmass stretching from China to Europe, historically connecting different people, communities and cultures through trade. Following the dissolution of the Soviet Union and Yugoslavia, trade has played a powerful role in transforming newly independent countries and in deepening their relationships with the rest of the world, including through WTO accessions. Today, with its vast deposits of natural resources, proximity to large and fast growing markets and increased connectivity across the region, Eurasia is once again at the heart of globalisation attention. This session will: (i) discuss the evolution of Eurasia in the global economy, including different forces and players shaping the region; and (ii) provide an overview of the evolution of regional integration in Eurasia, including the impact of economic reforms on the trade and economic performance of the countries in the region.

Eurasia in the global economy: What are the forces shaping the future of the region?

Belt and Road Initiative and the multilateral trading system

This session will focus on the exchange of experiences in WTO accession negotiations in Eurasia, concluded and ongoing, and the specific negotiating results in completed accessions. Following the dissolution of the Soviet Union and Yugoslavia in 1991, most of the newly-independent states made applications to join the GATT in 1993 and 1994. Each of these accession processes had its own dynamics and specific outcomes. Some of the accession processes were longer and carried greater complexities, including those associated with creation of a regional trade bloc before joining the WTO. Following an overview presentation on the achievements to date and the state of play in WTO accessions in Eurasia, this session will focus on: (A) concluded and ongoing WTO accessions in the context of the Eurasian Economic Union (EAEU); (B) the experiences of Article XII Members from the region; and (C) ongoing accession negotiations.

11:15 – 11:30
(The panellists are invited to make 10-min statements, followed by 5-min interventions by each commentator)

WTO accessions in the context of the EAEU

Round Table of Article XII Members

What are the most important factors to deliver accession?
What are the post-accession experiences and gains?

Round Table of Acceding Governments

What does WTO accession offer today?

CONTRIBUTIONS OF WTO ACCESSIONS TO RULE-MAKING

WTO Accessions have proved to be a vehicle for WTO rule-making, often a step ahead of multilateral trade negotiations. For instance, since 1997 Article XII Members individually undertook the commitment to eliminate export subsidies in agriculture as part of their accession packages to join the WTO, much before the historical decision taken by all WTO Members at the 9th Ministerial Conference in Nairobi, Kenya, in 2015. Some accession packages include disciplines in the area of export regulation, including the tariff concessions on exports. Article XII Members are active participants in WTO agreements of plurilateral nature, such as in the areas of Information Technology and Government Procurement. This session will focus on the role and importance of WTO accessions for the future of rule-making.

Contributions of WTO Accessions to Rule-Making

At the WTO’s 11th Ministerial Conference in Buenos Aires a number of Members announced new initiatives to advance talks at the WTO on the issues of electronic commerce, investment facilitation and micro, small and medium size enterprises (MSMEs). This session will facilitate continued discussions on these subjects.

11:15 – 13:00
(The panellists are invited to make a 10-min statement/presentation, followed by 5-min interventions by each commentator)

State of play in Joint Initiatives in Trade:

Permanent Mission of China to the WTO

Permanent Mission of Kazakhstan to the WTO

This programme for the Seventh China Round Table and documents circulated under the China's LDCs and Accessions Programme are designed wholly and exclusively for technical assistance and capacity building purposes and under the WTO Secretariat's own responsibility. It is without prejudice to the positions of Members or to their rights and obligations under the WTO.